Performance of the 1st and 2nd day 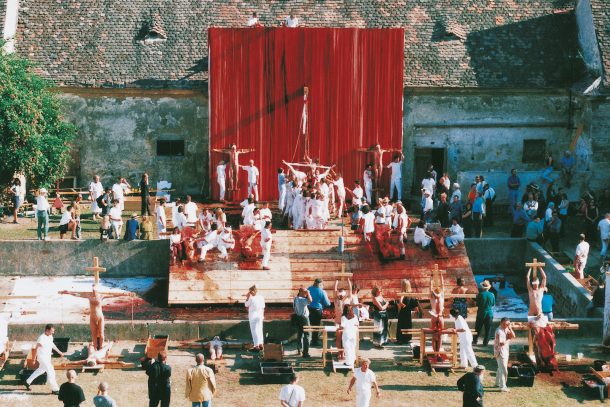 24 years after the first realization of the 6-DAY-PLAY (1998), the total work of art in Prinzendorf is to be condensed again in 2022 into a concentrated interplay of all its components.

The length is analogous to the history of creation and is understood as an extension of all monumental works of art. All actions of the O.M. Theatre performed since then, i.e. since the early sixties, must be understood as partial realizations of the 6-day-play.

The Orgien Mysterien Theater is an artistic endeavour. In addition to the visual idea of form, music plays an essential role. The basic concept of the play is based on a symphonic idea. The scene of the action is the castle in Prinzendorf with all its rooms and the surrounding landscape of the Lower Austrian Weinviertel.

*Due to the unfortunately ongoing pandemic and to protect the participants and players, it has been decided to perform only the 1st and 2nd day of the 6-day-play this year.

Performance of the 1st and 2nd day